Dr. Padwick Gallen started his career in the government in 2006 after completing his medical studies at the Fiji School of Medicine. He secured an entry level physician position at the Pohnpei State Hospital and served as one of several general practitioners for four years before he decided to further his studies in ophthalmology at the Pacific Eye Institute in Suva, Fiji. While studying at the Pacific Eye Institute, Padwick had the opportunity to interact with and learn from world-renowned ophthalmologists from Australia and New Zealand. He also had several opportunities to attend The Royal Australian and New Zealand College of Ophthalmologists (RANZCO) conferences, where ophthalmologists come together to share the latest innovations in eye health care.

These experiences were critical to the foundation he laid when he returned to Pohnpei four years later and resumed his career at the Pohnpei State Hospital, working as the only ophthalmologist in the country. At the hospital, Padwick sees a variety of cases that include refractive errors, cataracts, diabetic retinopathy, traumatic eye injuries and many other types of eye problems.

In his years working at the Pohnpei State Hospital, Padwick managed to secure funding to procure much-needed eye care equipment. While recently serving as Acting Chief of Medical Services, he upgraded operating procedures for the hospital’s emergency room. He was able to successfully lobby for increases in pay for all doctors and recruited twelve more doctors, increasing the overall capacity of healthcare in Pohnpei and the wider FSM. He currently plays an instrumental role in the fight against COVID-19, serving as the Chair for the Subcommittee on Infection Control and setting up the health screening and quarantine protocols as the Medical Team Lead in the Pohnpei State COVID-19 Task Force.

Padwick is married to the love of his life, Suzanne Lowe Gallen, a 2013 alumnus of the ELDP, and they have three children. 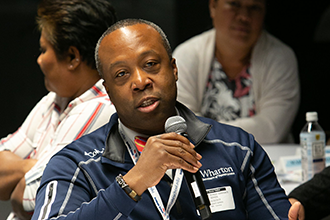